I have never made any bones about my respect and admiration for this man. I've already written about Dato' Dr Toh Kin Woon a few times in this blog here, here, here and here. Add to them this latest entry.

I've known Dr Toh for about 15 years now, since the days when he became the president of the Penang Chess Association, and I know that when his mind is firmly made up on something that is right and equitable, he will never waver in his convictions.

When he was still in government, he was the only outspoken voice in support of the disgraced Anwar Ibrahim. Through thick and thin, Dr Toh supported Anwar. During Hari Raya Aidil Fitri, Dr Toh would invariably stop by Anwar's house in Cherok Tokun, Bukit Mertajam.

At that time, Dr Toh was still the state assemblyman for Machang Bubok. He would have to pass along the Kulim Road on his way to his constituency. Maybe this was a reasonable excuse for stopping in Cherok Tokun but essentially, actions speak louder than words and this was a very loud statement of his support for an ostracised leader.

Since 2008, Dr Toh had retired from politics. His main interest now is to participate in causes of non-governmental groups who try to work against corruption, excesses and inequalities in this country and attempt to bring about positive changes.

Among other efforts, he had been very determined in his support of the bersih 2.0 rally in Kuala Lumpur last year. As everyone knows, this was an event that was feared and then declared illegal by the federal government which then turned its brute force on the people who assembled peacefully in Kuala Lumpur on 9 July 2011.

I've met Dr Toh occasionally since then. One of the last times was at an art gallery in Beach Street, George Town sometime last year.

The latest was about a week ago. I wasn't surprised to see him at the official launch of Kee Thuan Chye's book, No More Bullshit, by Penang Chief Minister Lim Guan Eng but it really knocked me to see him saunter quietly into Clove Hall wearing the totally recognisable yellow t-shirt of bersih 3.0. More than that, he was mingling with the guests and distributing bersih 3.0 leaflets and asking them to support this cause on 28 April 2012. 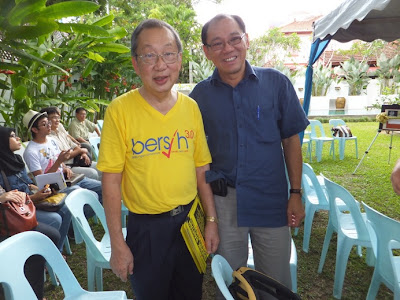 He was totally unobtrusive but later, he met up with the Chief Minister after the book launch had been concluded. It said a lot for the guests that they also warmed up to this very courageous man. 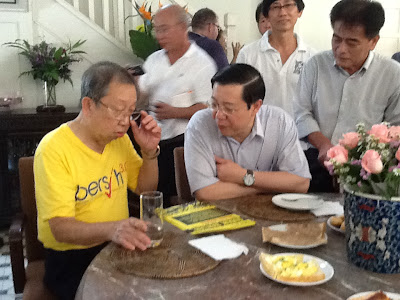 Email ThisBlogThis!Share to TwitterShare to FacebookShare to Pinterest
Labels: Bersih