A family of teachers


I've been seeing a number of my old school pals lately but this afternoon was quite something else. I went downtown to meet up with Chuan Keat and Leong Teik - the former having arrived from Kuala Lumpur yesterday and the latter zooming up from Singapore on the same day - and we then went to the E&O Hotel in Farquhar Street to visit our old school teacher, Tan Joo Sin, who is now a long-term resident at the hotel. Swee Poh was already there with her and from what I know, he is her very regular visitor whenever he's back from South Australia, sometimes visiting her two or three times a week. 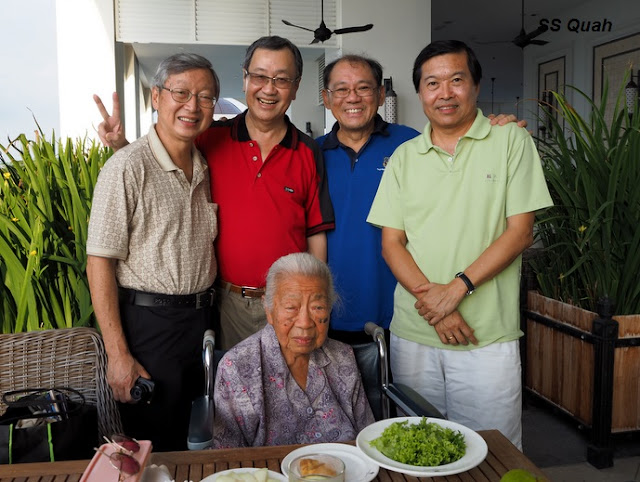 Tan Joo Sin should be well in her 90s by now. Previously, she lived in a bungalow house in Barrack Road but when her sister passed away several years ago and unaided walking became a problem, she moved into the E&O Hotel with two foreign carers. I've no idea how much she must be spending on her accommodation in this five-star hotel but it must be costing her an arm and a leg.

Ms Tan was my teacher at the Penang Free School but unfortunately, my memory fails me whenever I try to recall the subject or subjects that she must have taught my classmates. Was it English? Or was it English literature? Or could it be Physical Geography? Mmm....

Anyway, I do remember that she was the teacher-in-charge of the Khutub Khanah Tunku, an absolutely indescribable name for the PFS Library that was opened in December 1969, and named after the country's first Prime Minister who happened to be an Old Boy of the school.

After my Higher School Certificate examinations in 1972, I regularly returned to the school to use the library. It held tons of interesting books, old books even, including a series of great classic novels such as Thomas Malory's Le Morte d'Arthur. I would walk the corridors, peering at the shelves and especially, rummaging through the foreign newspapers and magazines when I discovered, quite by accident, that magazines like The Spectator carried a chess column within its pages. I would disappear into a tiny room at the back of the building where the old magazines were stored. I had great fun reading all those magazines and book classics while free of any exam worries and before worries of the exam results set in.

Incidentally, Tan Joo Sin had a brother teaching in the Penang Free School. Capt Tan Boon Soon was the afternoon supervisor when I entered PFS in 1966, the position akin to being the afternoon "headmaster". Tan, himself an Old Boy of the school, was also captain of the school's Cadet Corps. He, together with three or four other teachers, would occasionally turn up for work dressed resplendently in white knee-length trousers while wearing shiny black boots with long white cotton socks pulled up and folded down below the kneecaps. A typical Old World gentleman.

For heritage, for charity


Over the course of the last two months, I have participated in two walkabouts around the heritage zone of George Town, all in the name of helping to raise funds for charity. In March, my wife and I took part in the three-kilometer D'Home charity walk while more recently, about a week ago, it was in a slightly longer five-kilometer FMM heritage green walk. On this latter occasion, I walked by myself as my wife was caught up with the organisation of this event.

Starting from the OCBC Bank, the route took us past several prominent landmark heritage sites in the city: 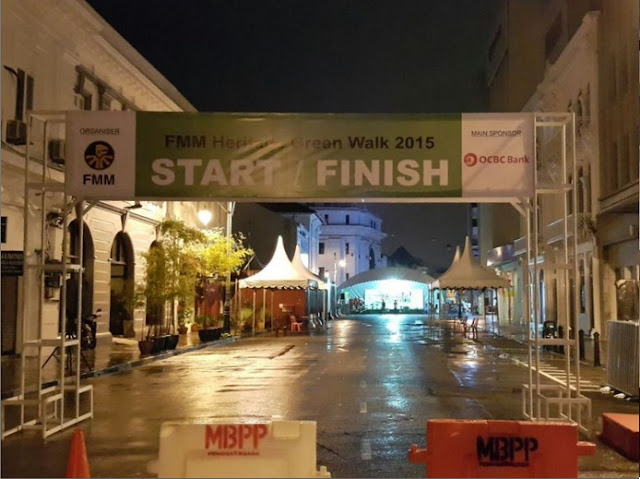 Beach Street at five o'clock in the morning. 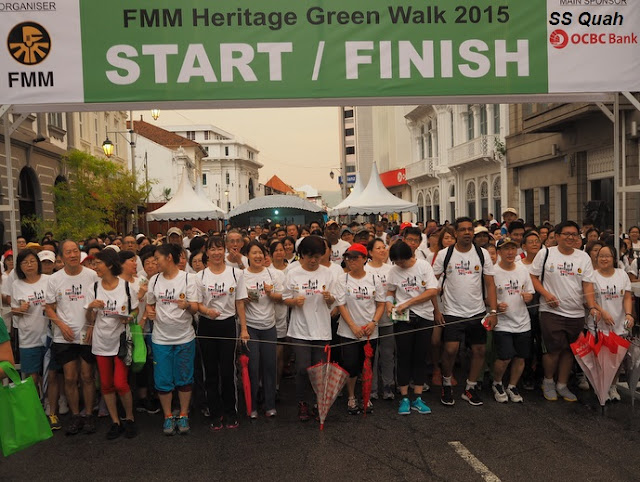 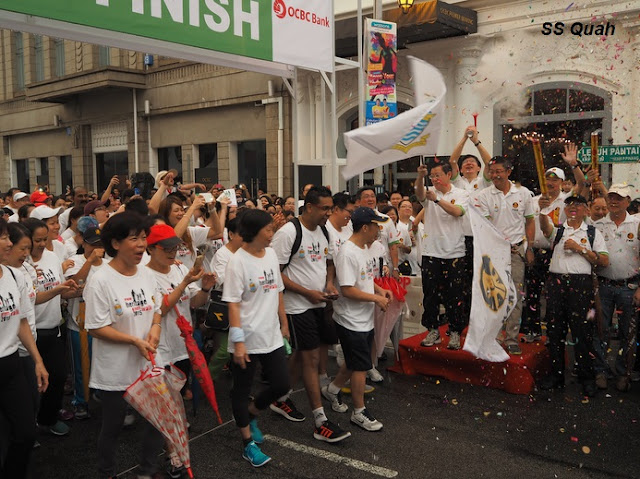 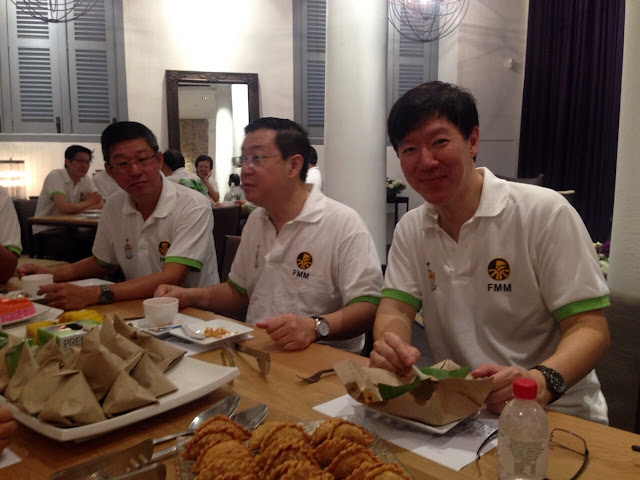 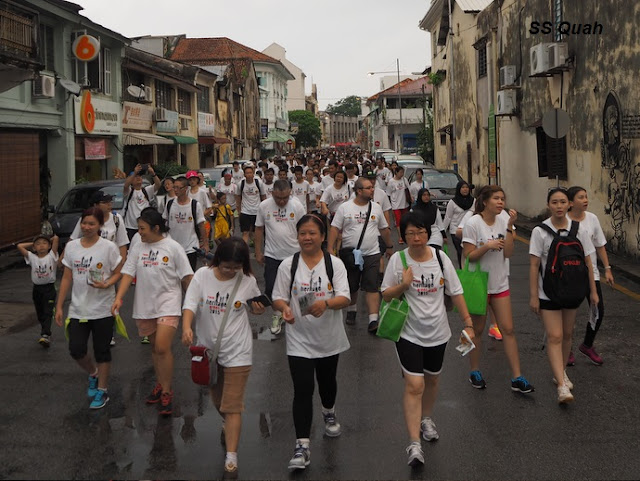 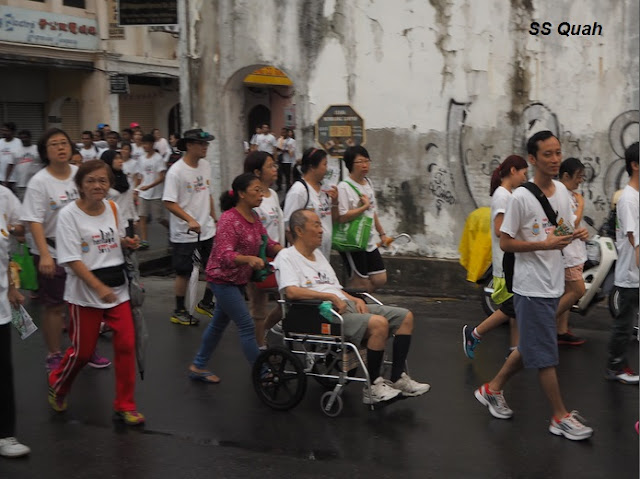 Family fun, including this participant being pushed along the route 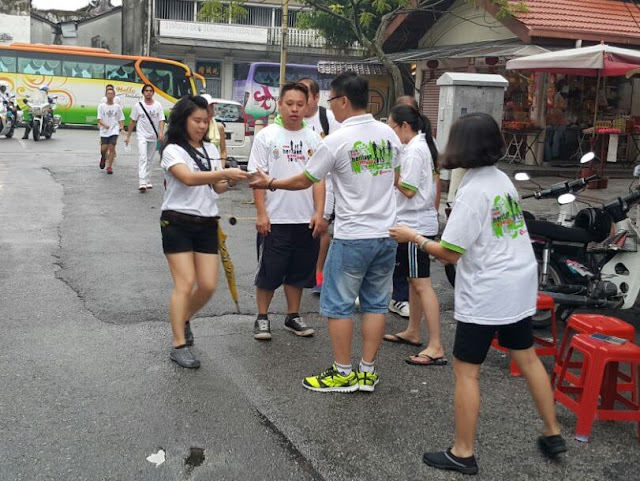 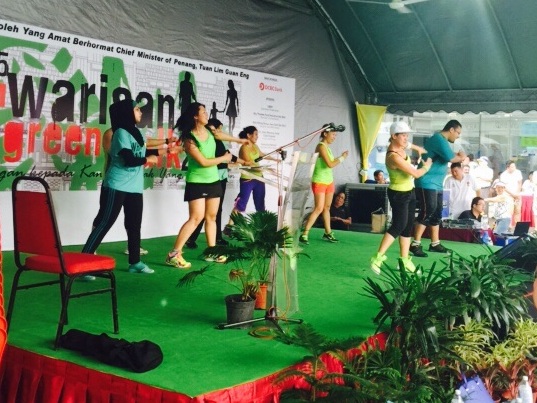 Walk's over and it's time for some fun on the stage... 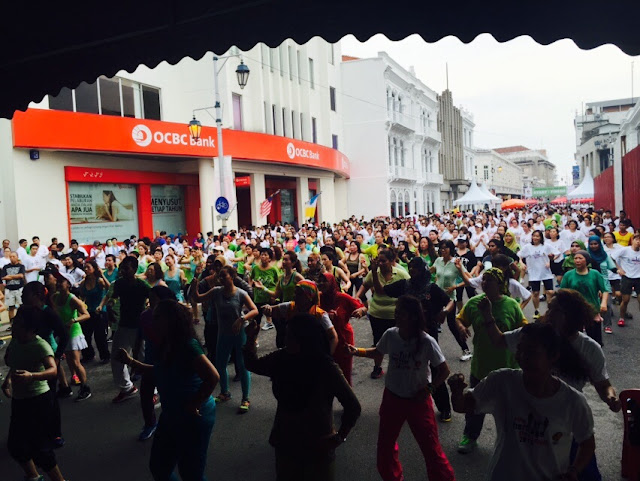 ...and on the street, crowds join the lively zumba craze... 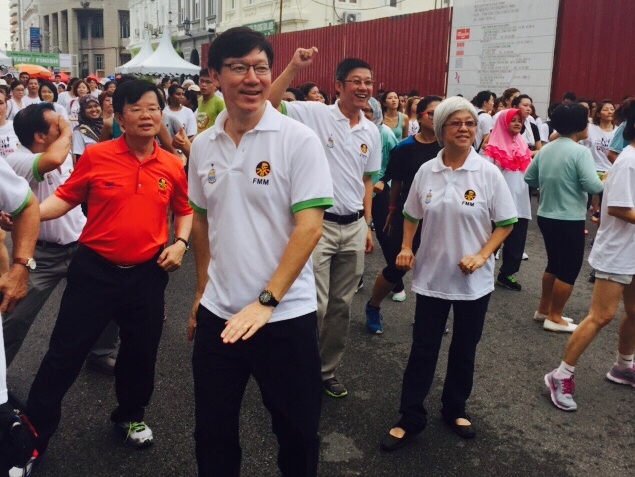 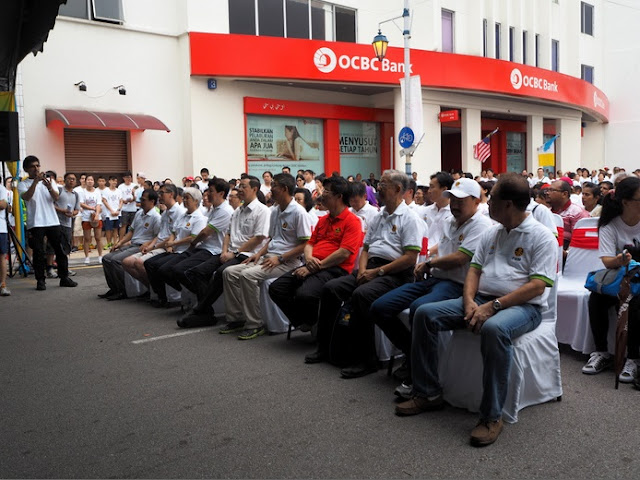 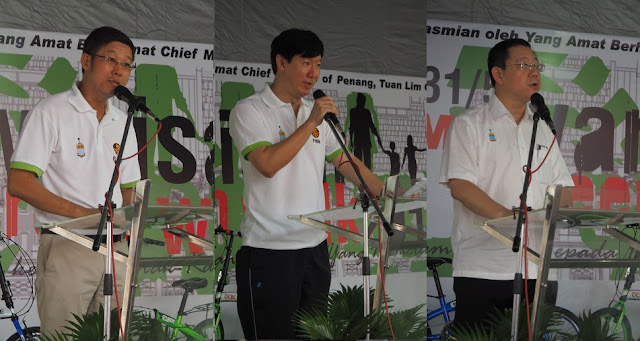 But first, the obligatory speeches

The Penang Chief Minister's inspirational speech. I failed to record the beginning of his speech and only managed to capture the second half. But what a message he delivered to the people of Penang! Certainly worth a viewing or two. 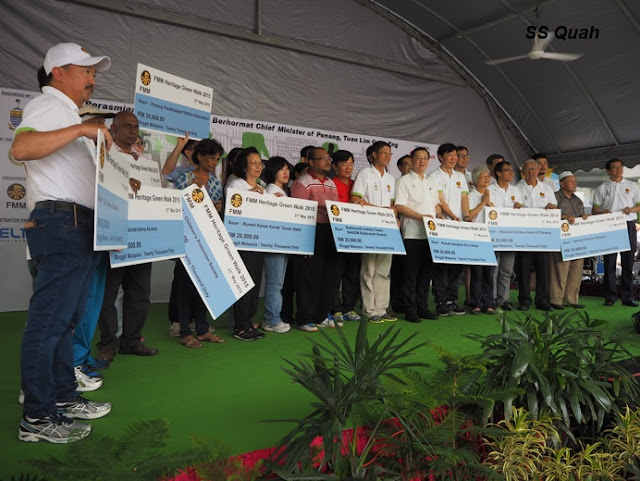 The donors and representatives of the 10 charitable organisations, each receiving RM20,000 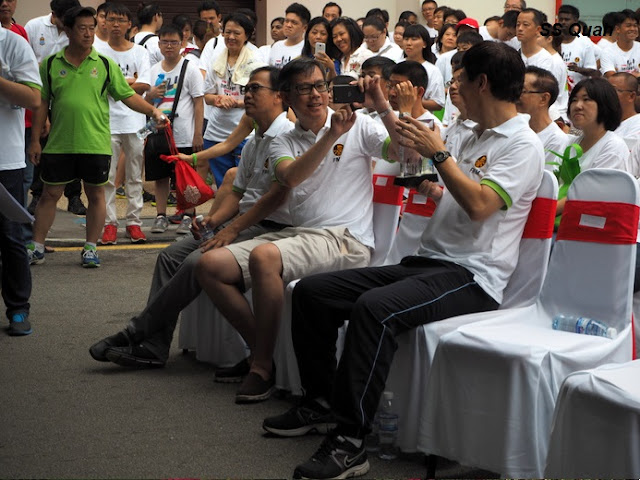 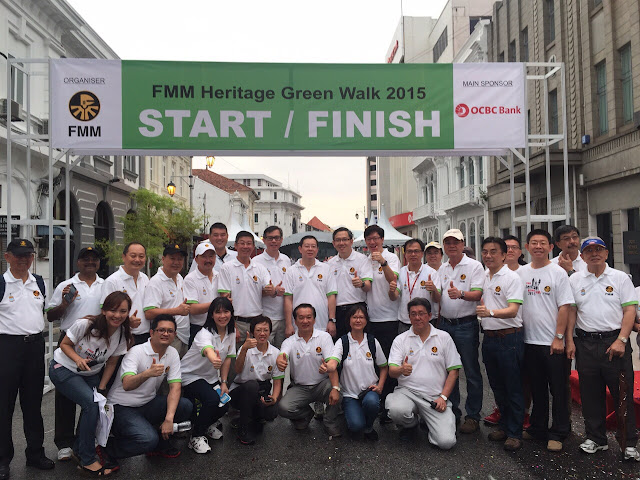 A planned get-together and unplanned ones too


The last weekend has been pretty busy for me. On Friday evening, I was invited to a networking dinner at the OCBC Premier Banking Centre in Beach Street, George Town. And then on Saturday, it was the Board of Prefects 150th anniversary dinner at the Penang Free School hall.

Early Sunday morning saw me in Beach Street as I participated in the five kilometer-long FMM heritage green walk which mended its way through the heritage parts of the city, followed a few hours later with a closed lunch with old schoolmates at The Old Free's Association's tavern in Northam Road.

Needless to say, with all these activities - especially the strenuous walk on Sunday morning - I really enjoyed a good night's sleep and awoke refreshed this morning.

I wouldn't be writing about this if not for the fact that I met up with several old friends and former colleagues. 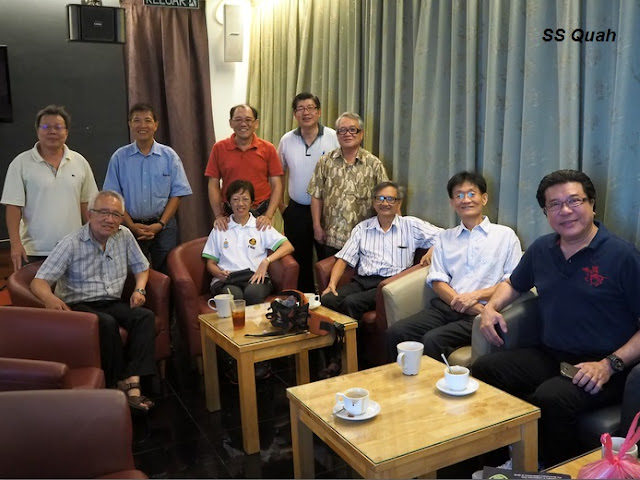 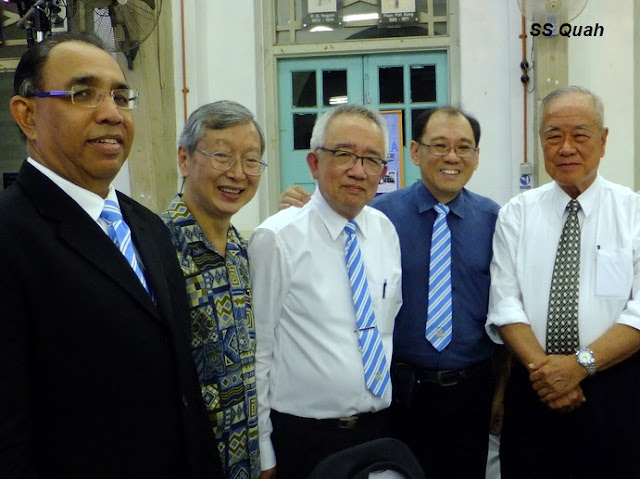 Amidst the 300-odd people that had crammed into the school hall at the Penang Free School, I was quite certain of bumping into some of old school friends. Which I did. Not many, though. Could count those present with the fingers on one hand. That was how many of my old school mates were present at the BOP 150th anniversary dinner. Wished there were more.

So here we were with, left to right, Abu Huraira bin Yazid, Cheah Swee Poh, Lim Siang Jin and myself. On the far right was our former mathematics teacher - he taught us additional maths in Forms Four and Five, and modern maths in Form Six - who later entered politics and was an Executive Councillor in Penang during the days of Lim Chong Eu's tenure as Penang's Chief Minister. At one point, Khor Gark Kim was briefly deputising for Chong Eu. 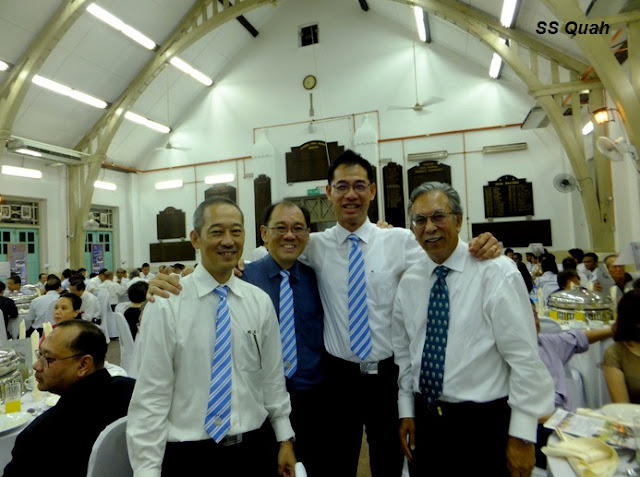 At the same dinner too, I bumped into a handful of former colleagues from my Ban Hin Lee Bank days. We got around for a photograph but unfortunately later, I discovered that there were two other ex-BHLBank friends in the hall. Abdul Aziz Sulaiman was actually seen seated here when we took this photograph. Nuts, if I had realised it, I would have asked him to join in. The other ex-BHLBank colleague was Yusri Hamid but he was a distance away. I did try to get another group picture later but with people already starting to drift off after the dinner ended, my hopes of a second photograph ended too. Anyway, seen here, left to right, were Ng Khye Wai, myself, Chew Kah Hooi and Zakaria Merican. 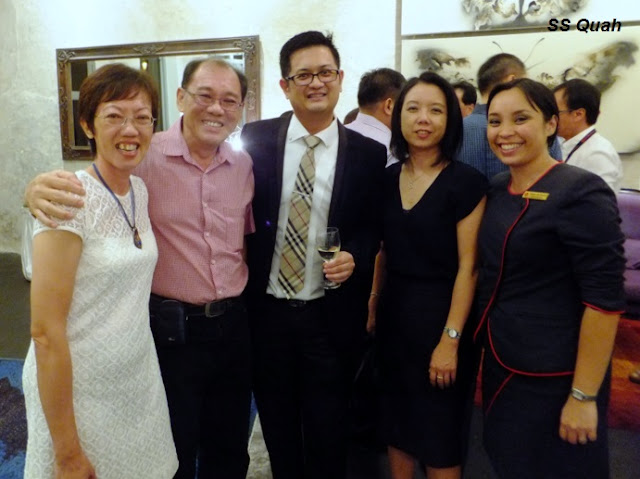 And finally, there were these five of us at the OCBC premier banking centre. Alex Tan Cheng Keat, Ng Ji Li and Cheryl Deborah de Souza are now staff of OCBC Bank in Beach Street but before then, they were staff of the now defunct Ban Hin Lee Bank, just like myself and Saw See.

Alex started his banking career as a teller at Pulau Tikus Branch of Ban Hin Lee Bank. About six months, he said. There were countless hours spent sorting and counting bank notes. I asked him, "Really? You were at PT Branch? Would you remember the address of the branch?" He could not. "Well, it's 403," I reminded him. I should know very well; I was among the pioneer staff when the branch opened in December 1977.

Ju Li said that she was working in the same branch too before moving to the Corporate Loans Division later, while Cheryl said that she worked at the Komtar Branch for several years. Regaling in past memories, Cheryl said that she really looked forward to going to work every day while at BHLB. Her days at Komtar Branch actually molded her work ethics and culture. She reported to Wong Kim Meng and he was absolutely very strict with the staff and brooked no nonsense. If anyone were to so much as to draw a crooked line in the registers, he would simply throw the registers back at the offending staff.