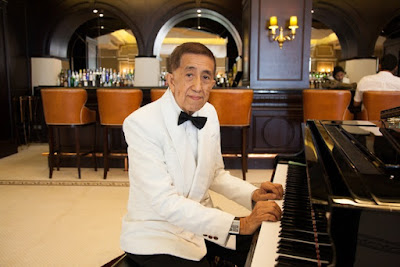 People my age may recognise this name instantly. Ooi Eow Jin is a local musician and composer. In his younger days, he was a band leader who led the Radio Television Malaysia (RTM) Orchestra for many years.

I've just found out that Eow Jin has finally retired from the local music scene. He is now 77 years old (born in 1938) at an age when most people would have taken life easy, but he had to keep working hard for a reason which I would like to share on my blog.

During his long career, Eow Jin had supported his two sons through their education until both graduated from University. Unfortunately, his second son died after a prolonged battle against leukemia despite his efforts to give his son the best treatment available. Eow Jin, himself showing signs of Alzheimer's disease, continued his career as a resident pianist at the Majestic Hotel in Kuala Lumpur until 30 June when he made his final bow.

I am told that his eldest son is now suffering from a brain tumour. Again, it was with the effort of Eow Jin that the son is still hanging on to life. Eow Jin now lives with his wife and son in a home shared with other unfortunate people.

Jimmy met with Eow Jin and another fellow Old Free, Richard Hoon, and they (Jimmy and Richard) agreed to do their best to help Eow Jin and his family to have a more comfortable life from now on. To achieve this, they proposed to organize at least three charity shows to raise money for Eow Jin. One of the shows is now coming to fruition. I received this appeal letter today with details of the first show which will be in Petaling Jaya: 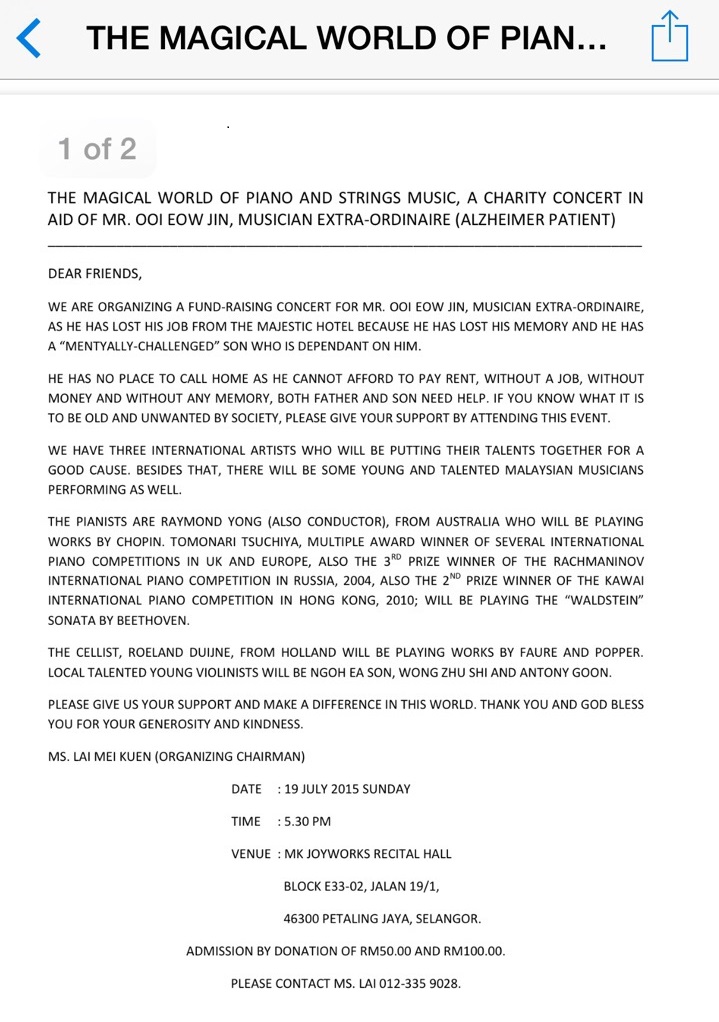 I wish to call upon my friends, both Old Frees and non-Old Frees, to support this worthy programme to help this outstanding man in his difficult times. Even if you can't make it to the show, please consider donating some funds. Whatever you give, I'm sure you will receive back the blessings many times over. Thank you. The programme appears below: 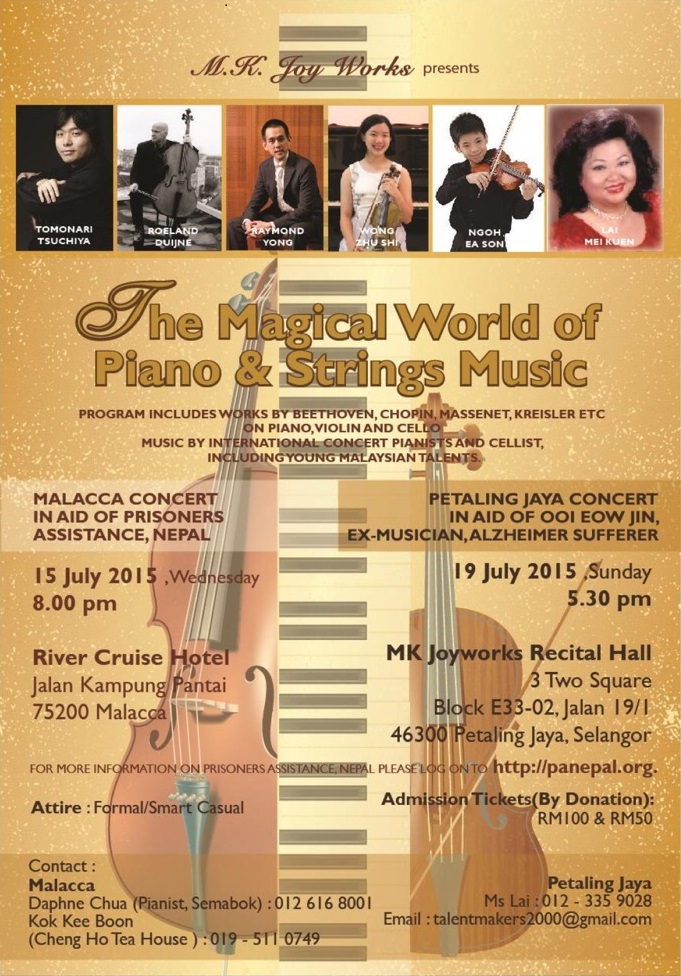 Is there a bank account we can channel donations into for Mr Ooi?

Yar, can we have bank account? please email to me - hoyoyi@gmail.com TQ

is there a bank account where we can channel donations to Mr Ooi? would really like to help. pls PM gabrielagan@hotmail.com

Kindly email me at : mlwong4@gmail.com
the bank account details for Mr.Ooi Eow Jin.
Thanks lots.

this is so sad. i read his earlier news before and it was sad too, how he got deprived, sigh....

can you help to publish bank account for this donation? some of us can't attend the concert.

I'm in Canada and I know the importance of Ooi Eow Jin in Malaysian music history. He's a stalwart from that era. Ask any Malaysian musician from that time - old, young, rocker, orchestra - and they would know Ooi. When I saw this story shared on Facebook, it was the first time I'd heard that name for decades, but I knew it immediately. I had the privilege once of having Richard Hoon play keyboards for a musical project I was involved in. I'd like to donate something. Let me know if it's possible to do it from Canada. Thank you.

The great man in action! And he smiled for me! http://youtu.be/bFD0l2geArU

We want to go to the recital but it will be held before breaking of fast.
Please also advice us if we can give some money for Mr Ooi to ease his problem by giving us his bank account number.
Thank You

Mr. Ooi is a legend to Malaysian music. Plse give me his bank details through kstoz2013@gmail.com. Also can the tickets be bought online? TQ . Sim

Kindly email me the bank details for Mr Ooi Eow Jin at : sling168@yahoo.com
Thanks

Please email bank Acc to soyabeanmilk@gmail.com. Also has the media carried this story yet? Jade

I have been in contact with Mr Ooi's son, Raymond who happens to be my class mate, and have conveyed to him that there are many good Samaritans who would like to help his family by some money contribution. He will let me know the details of the account number in due course. Raymond is having mobility problems after his brain surgery and slur in his speech but still an alert person. Hope to update all of you soon. On behalf of Raymond and his family, please accept my sincere thanks towards the monetary contribution. I would like to post Raymond's or his dad's number here for you to call him to confirm the money transfer after they give me the approval.

A published bank account number may be needful - there may be lots of people who might not be able to be there at the event but would like to contribute in terms of RM....

I contacted Raymond and according to him, Mr Ooi's account is dormant now.

Unsure whether anyone here is comfortable to bank into Mrs Ooi's account provided you call Mr Ooi Eow Jin to confirm beforehand.

For all intents and purposes, I have proposed to Raymond to request Mr Ooi Eow Jin to open a bank account tomorrow.

Raymond will discuss this with them and will let me know. The moment I have his account number, I will post here.

This is to avoid any misunderstanding.

Hi, Im keen to contribute too. Waiting for acc details

Please send the bank a/c number over here as well to daniel.tan@zas.com.my.

I am based in the US but I am willing to donate. Please keep us updated with his bank account details. This sweet men deserve to retire and lead a care free life

Does anyone know who will manage Mr Ooi's bank account?
Seeing as he has dementia and his son is unwell, are either of them able to handle fianances? Or maybe his wife (whom I assume is quite elderly herself too)?
Donating money is all good, but we should try and ensure the funds are well managed for him and his family.

I have been following up with his son, Raymond and based on our telecon last nite, Mr Ooi's account has been dormant and for some reasons, he can't open any other accounts.

I m trying to speak to Mrs Ooi for a solution to this.

The latest update- for some personal reasons, Mr Ooi is unable to open a savings account. In fact he has personally written a note to say that he doesn't have any saving accounts.

If you wish to contribute, you can bank into Mrs Ooi's account and the details are as follows:-

Thank you once again

Just received a call from Raymond.

The bank account is in Ambank and not Maybank.

One way to gain confidence is to maybe get Raymond's Birth Cert to show Khaw Lean Kee and Ooi Eow Jin are his parents. Then we can at least know account name Khaw Lean Kee is genuinely Mrs. Ooi.

I fully agreed to Tim Tong's suggestion on posting Raymond's birth cert to confirm that Khaw Lean Kee and Ooi Eow Jin are his parents.

Hi
Which account should I bank in?
How shall I reconfirm that after bank in?

I totally agree with the proposal.

Maube can get a lawyer to verify and confirm.

I am sorry that for some personal reasons, Raymond is unwilling to send me his birth certificate despite me telling him how important the document is to authenticate the process of contribution.

I have done to the best I could.

I was Raymond's former classmate at Catholic High School, PJ and I wish I could do something for him. My apologies that this may stop here. However, you can always call his mum Ellen as I have posted her number in earlier post.

Thanks Beng Hwa for all your efforts. I think I will take it in good faith.

I messaged Ms Lai Mei Kuen, the organiser of the coming concert on donation and she replied as follows:-
If you wish to purchase tickets, please come to THE TALENT MAKERS, NO 48A, Jalan SS2/24, Petaling Jaya.
If you like to bank in, please bank in to
Public Bank A/C No:6 007 9037 06 Lai Mei Kuen
Please email the banking details to talentmakers2000@gmail.com after the transaction so that we would know the amount of donation. Thank you and God bless, Ms Lai.

Better to attend and enjoy the music of course but if cannot, can use the second alternative.

Hi Beng Hwa. Please assist to find out if the home Uncle Ooi and his family is staying has someone to care for them daily. Do they have access to free medical attention. I am concerned over their well being whether they have been taken care well. They are elderly and their son also need proper medical attention. Ratana has boarding for elderly ppl and free medical attention. Uncle Ooi was my dad's former Math teacher also way long long long time ago....Please assist to obtain information as i would like to assist and ensure that they have proper medical care and being taken care. This is the little humble way we can help. Thank you very much. You may contact me at yanyansoon@gmail.com.

Hi Sarah.. I will try to find out and will post an update here.

Hi Beng Hwa, thanks for all your updates & efforts to assist Mr Ooi & his family in their predicament. God bless.

Thank you, everyone, for your concern about music maestro Ooi Eow Jin. I have a new story on my blog here to detail how you can help OEJ with some contributions in the mean time. My friend, Jimmy, is in constant touch with OEJ and his wife, and he told me that until a proper OEJ Fund can be set up (some legal requirements, I'm told), this is the ONLY temporary bank account to use. Please remember to email him the bank details so that he can account for all contributions.

The story to refer to is http://ssquah.blogspot.com/2015/07/helping-ooi-eow-jin.html