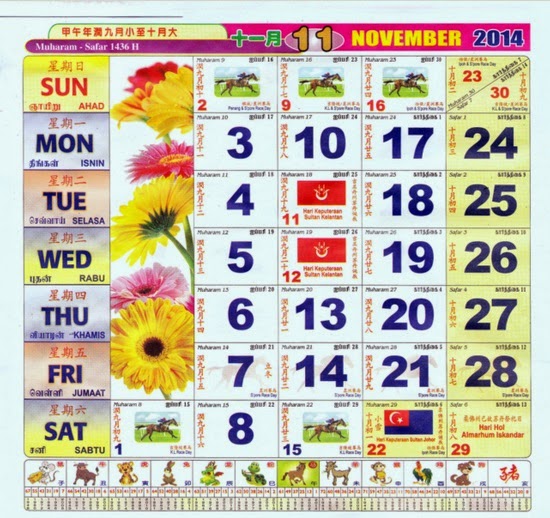 This set me thinking because the ninth lunar month has always been the month of prayers and celebration of the Nine Emperor Gods. And I distinctly remember that we in Malaysia had been celebrating this occasion from the 24th of September until the second of October. Those dates would have made it almost two months ago and yet, we were still in the ninth lunar calendar month until yesterday!

At first, this did not make sense because how could a lunar month be 59 days long? Then I took a closer look at the calendar. The mystery unravelled itself. From the 24th of October until yesterday, the 21st of November, we have been living through what is known as the intercalary ninth lunar month.

This is an extra month inserted into the Chinese lunar calendar every third year or so to compensate for the shorter Chinese lunar year when compared to the consistent mean solar year (365.2425 days) which is the time it takes the sun to move across the sky and return to the same relative position in the sky every year as seen from the earth. 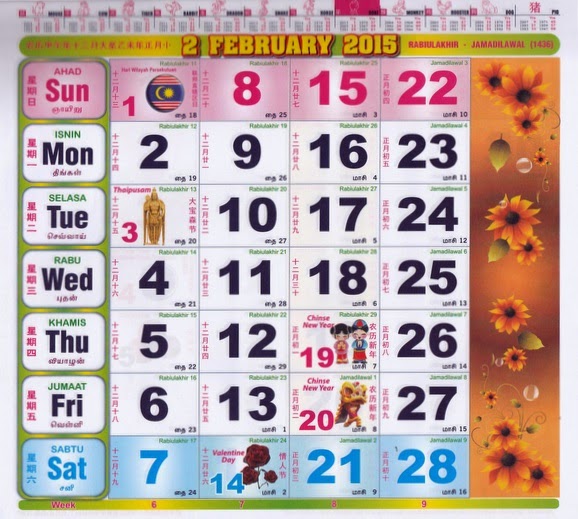 Yet the luni-solar calendar has its importance too and we have at least three significant dates that depend solely on the use of this calendar: the Lip Chun Coming of Spring (立春) on the fourth of February, Cheng Beng (清明) on either the fourth or fifth of April and the Tang Chik (Tung Chik) Winter Solstice (冬至) on either the 21st or 22nd of December.

At this time of the year, my thoughts always turn to the coming Lip Chun or Li Chun (立春) which marks the beginning of Spring in China and takes place officially on the fourth of February annually. On this date, the sun is deemed to have crossed the 315° longitude in the sky. The only question is to ascertain the time that it does so. 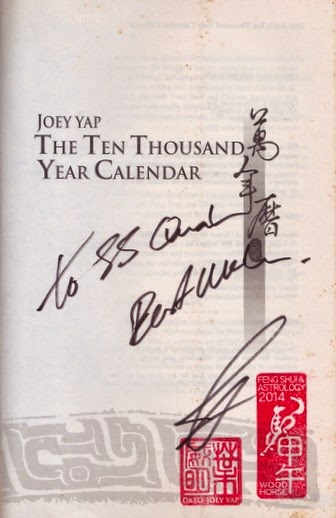 Without much reference material to read from, my only resource is this book by Joey Yap which is called The Ten Thousand Year Calendar (and yes, I got it signed by him, finally!)

It's a very useful book if you know what to use it for. Unfortunately for me, I've only two main uses for it and one of them is to find out when exactly is the time of Li Chun (立春) every year so that I can prepare for my annual family ritual of sticking that red piece of paper on my rice bucket to signify abundance for the forthcoming year.

Now having already established all this, let me tell you that this Ten Thousand Year Calendar book says that Li Chun (立春) will fall exactly on noon time (12p.m.) on 4 February 2015. For those referring to the Chinese lunar calendar, this is the 16th day of the 12th moon.

立春, since it's a solar term, also lasts for roughly a fornight, with three pentads, and ends on the 17th or 18th when another solar term 雨水begins.

The three pentads for the Start of Spring are:

東風解凍 - defrost by the Eastern wind
蟄蟲始振 - insects starting to awaken from hibernation
魚陟負冰 - fish begin to swim upwards towards the thawing ice.