George Town can boast today that it is home to many of the oldest banks in the country. Long before the foreign banks decided to open their branches in Kuala Lumpur, they were already doing business in George Town.

For example, I mentioned in this blog three years ago that the Mercantile Bank Ltd used to occupy a building beside the Algemene Bank Nederland (ABN) along Beach Street. The former began operations in George Town as the Chartered Mercantile Bank of India, London & China in 1860 and was issuing Straits Settlements currency notes by 1882, one of the few banks with the privilege.

As for the ABN, it started operations in George Town as the Nederlandsche Handel Maatschappij or Netherlands Trading Society in 1888. After a merger with the Amsterdam-Rotterdam Bank (AMRO), the merged entity became known as the ABN-AMRO Bank in 1991. Then about 10 years ago, the bank relocated to another part of Penang and the old building was converted first into a restaurant (Old China Cafe) and later, used as an art gallery (run by the Koe Guan Kongsi). In the last few years, the Royal Bank of Scotland completed its purchase of the ABN-AMRO Bank and moved back into the stately building. 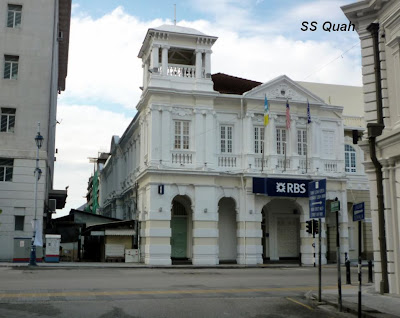 Interestingly, this heritage building originally sported a hemispherical dome on its tower instead of the pyramidal roof we know today.

If we compare the two pictures above, we can see a passageway that runs beside the building. It used to be a decent road, Crown Road, that separated the ABN building from the old British East India Company (EIC) building. Later, when the Hongkong & Shanghai Banking Corporation (HSBC) erected its own imposing building on this plot of land, it intruded into Crown Road. Today, Crown Road is just an alley. Apart from a newsagent and several Muslim coffee stalls opening here, it's now mainly an alternative walking route to the Bangunan Syed Putra government offices.

When I was blogging about the heritage banks in George Town three years ago, I mentioned that the premises of this old Mercantile Bank had long been left empty. Mercantile Bank later became the Beach Street branch of the HSBC in the mid-1960s, while the other HSBC banking office became known as the Downing Street branch. For about 30 years, the two branches of HSBC were operating almost side by side, separated only by the ABN-AMRO Bank. In the late 1990s or early 2000s, the two branches consolidated into one and the old glass building in Beach Street was vacated. 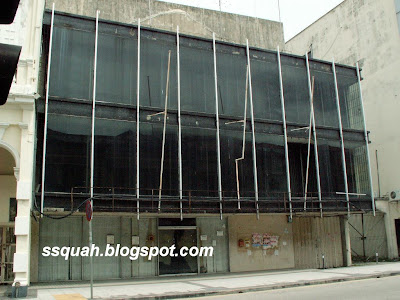 As a child, I hardly ventured into this part of George Town because there was no reason for me to do so. The fact that my father was working here was irrelevant to me at that time. Therefore, my earliest impression of the HSBC's Beach Street branch came after I started working at Ban Hin Lee Bank which was further down the road. As far as my memory went, the HSBC Beach Street branch had always maintained this glass facade and I never ever questioned him whether the building looked any different from the day he first started working there.

So for many years, this building with the glass facade was empty. In the last two years or so, contractors boarded up the front of the building and began some feverish renovation work away from the prying eyes of the public. It was only in the last few months that the boardings were finally removed to reveal this: 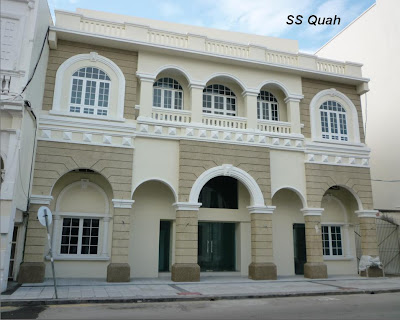 The front of the building now has an almost colonial feel. Maybe I shouldn't use this "colonial" word and should instead say "heritage" look. At first, I thought that the building's new heritage facade couldn't be real. Did the owners (presumably, still the HSBC) do this purposely to blend the building with its surroundings and give it a heritage look? Remember that I had always thought that the building had a glass facade. Now, the front looked almost as old as its neighbour, the ABN-AMRO building.

Then over the weekend, I remembered that I had some digital pictures of Old George Town stored somewhere in my computer. I opened them and was delighted to see that there was actually one precious picture that showed the original facade of this building. Now it made sense to try and restore the look. 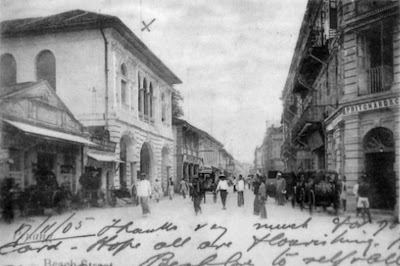 Well, it may not be an exact reproduction of the original facade but the restoration work is close enough. And I'm happy that there are still corporations in Penang who take George Town's heritage status seriously enough to bring the shine back to the city. It's not only this building that is undergoing conservation and restoration. Even the row of shophouses that used to be Pritchard & Co on the opposite side of the road are being carefully restored. I can't wait to see what's in store for a revitalised Beach Street once all this have been accomplished. 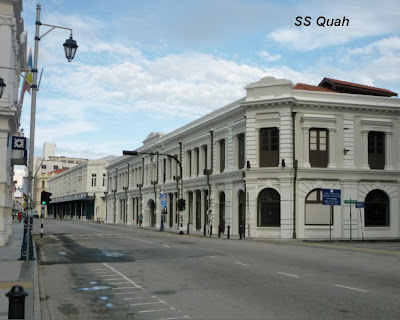 Very interesting bit of history here SS. I am intrigued to say the least. A question , in the the old photo the road seems narrower than present day Beach street. Surely the widening of the road would have encroached on the buildings themselves.I wonder how they went about it? Is it that one side of the road are relatively newer buildings?

Yes, Stephen, the road in the old photo certainly looked narrower. I believe when the new facade was put up, the front of the building had to be torn down and then recessed further inwards. Just compare the two pictures of the Mercantile Bank building, before and after restoration.

Dear Joseph, I am very sorry but I have no idea about United Commercial Bank in Penang. Would you know whether it was the precursor to the United Asian Bank?