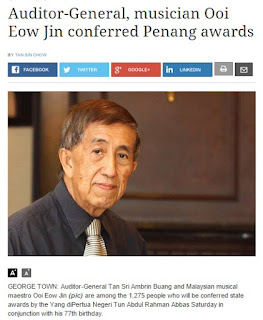 I am very happy to learn that Malaysia's forgotten music maestro, Ooi Eow Jin, is finally getting the long overdue recognition he deserves from the country. Well, maybe not from the federal government in Putrajaya but at least the state government in Penang.

I am very happy for Uncle Ooi whom I've never met. Ever since I heard that he was suffering from one tragedy after another - one son dying from leukemia and the other son suffering from a brain tumour -  I've been wanting to see how I could make life more pleasant for him. In my own way, of course.

So on the eighth of July, I decided to write a story here on this blog to highlight Eow Jin's plight. I had written about how some well-wishers were coming together to organise a benefit concert for Uncle Ooi in Petaling Jaya and encouraging people to buy the tickets. My story must have struck a chord because hundreds, if not thousands, of people around the country rallied round and raised close to RM100,000 for Eow Jin's benefit.. 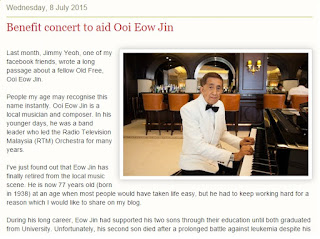 However, I was not satisfied with just writing this story. I felt that more could be done for Eow Jin who, like me, happens to be an Old Boy of the Penang Free School. Three days after I wrote that piece in my blog, I decided to send an appeal email to the Penang Chief Minister. I think it is time for me to make the contents of my appeal public:

I am referring to Ooi Eow Jin - or Uncle Ooi, as many people would refer to him - born in Penang in 1938, worked in Penang in his early 20s and then moved to Kuala Lumpur when he was offered the opportunity to work in the Radio Television Malaysia Orchestra. He rose to become the bandleader of the RTM Orchestra and then left to join TV3. When his stint at TV3 was over, we was appointed as an adjunct professor in music in one of the local tertiary institutions. After his retirement, he remained active in music and was employed by the Hotel Majestic in Kuala Lumpur as their resident pianist, tinkling away at the keyboards six afternoons a week. And he was already in his 70s.

But there is more to this man than just his career. During his stint with RTM, he arranged a medley of songs that won a young singer the Bintang RTM award in 1976. Soon after that, he composed the first song which this young singer recorded in a studio. This song was "Teriring Doa" and it was Sudirman Arshad's first local hit. Until his final days, Sudirman - Malaysia's Number One entertainer - never forgot the part that Uncle Ooi had played in his career.

Ooi Eow Jin composed many other hits for our local singers. For instance, there was “Masa Berlalu” for Salamiah Hassan, the mother of current jazz singer Atilia. Other songs included Dahlan Zainuddin’s “Lagu Untukmu”and Yunizar Hoessein’s “Kisah Gadis Sepi”. He wrote the entire soundscape for Yassin Salleh’s blockbuster film "Dia Ibuku" in 1981, along with the theme song sung by M Nasir. In 1965, Ooi Eow toured Sabah with P Ramlee to entertain the Malaysian armed forces.

But Uncle Ooi has his fair share of personal tragedy. During his long career, Eow Jin had supported his two sons through their education until both graduated from University. Unfortunately, his younger son died after a prolonged battle against leukemia despite his efforts to give his son the best treatment available. Eow Jin, himself now showing signs of Alzheimer's disease, continued his playing career at the Majestic Hotel until recently, 30 June 2015, when he made his final bow. I am told that his younger son is now afflicted with a brain tumour. Again, it was with the effort of Eow Jin that the son is still hanging on to life. Eow Jin now lives with his wife and son in a home shared with other unfortunate people.

Ever since I broke the story of Ooi Eow Jin's plight on my blog http://ssquah.blogspot.com and facebook, I've seen Malaysians of all ages come together to rally around him. Next week on 19 July 2015, there is an effort to organise a small benefit concert in Petaling Jaya to raise funds for Uncle Ooi. But there are grander plans afoot. I understand that some friends are planning two bigger benefit concerts in Penang and Kuala Lumpur later in the year.

I am not involved in any of these benefit concerts for our forgotten Anak Pulau Pinang but I was wondering whether you and the Penang government can chip in by:

1) Offering the Dewan Sri Pinang as the venue for the Penang concert once details are finalised; and

2) Recognising Ooi Eow Jin with a last-minute DSPN award. I know that the deadline for submission of award applications has long passed but I also know that the state government retains some prerogative. And I am suggesting that Eow Jin (already 77 or 78 years old) deserves it for his contribution to the Malaysian music industry.

Ooi Eow Jin is an Old Free (I am also an Old Free and I was one of the co-authors of the FIDELIS commemorative book which the Raja of Perlis launched in 2012) and I am confident that you, as the Chairman of the Penang Free School Board of Trustees, will want to rally round to help him too. Many thanks for reading my email....

Until today, I had remained mum about the content of this email because, well, I wasn't sure about how my request to Guan Eng would pan out. How would he respond to my brazen request? To be frank, I did not receive a reply from him. What was I supposed to do? What could I do? Why, send Guan Eng a Reminder! That was what I did:

I had sent this email to your official email address last Saturday but have not received any acknowledgement from your office despite a Whatsapp reminder to your PA, Julio. As a result, I am forwarding the same email message to you with the hope that the Penang government can look into it and do something nice for our forgotten music maestro, Ooi Eow Jin. The details are in my original message. Thank you.

Alas, no reply too. So I gave up the attempt to communicate further with my Chief Minister although I had two or three chances to accost him during some public events I had attended. But I was gutless. I did not. However inside me, I was hoping - really, really hoping - that he would take up this cause all the same.

And now, my hope to see some recognition for Ooi Eow Jin is realised. From tomorrow onwards, you can call him Datuk Uncle Ooi, haha..... :-)